Enter the world of Tawny Savage

This is a first for me, helping to promote (in my own awkward way) the newest release of Tawny Savage. As a reader who does not read as voraciously as I once did, her writing has renewed my appetite for the written word and has opened a whole nw genre for me to discover, devour, and feast upon.

I invite you to feed your imagination at the abundant banquet spread out by this amazing author.

Here is a small taste of Bigfoot’s Revenge 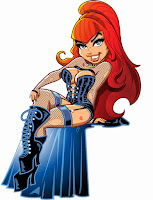 Tawny Savage has always enjoyed reading and writing taboo erotica that can bring all of our deepest darkest fantasies to life. Her tales aren’t for the faint of heart and won’t always have the happily ever after ending.  You’ll laugh, cry and want to beat the hell out of some of her characters and that’s just fine with Tawny. She’ll help you do it!
Join her for a ride you’ll never forget! Go ahead and drop a line to her through her publisher www.sassyvixenpublishing.net. Connect with her on Twitter @Tawny_Savage, Facebook, or check out her website Erotic Tales from Tawny Savage.

← Prev: One Step Forward... Next: People and their crazy thoughts →